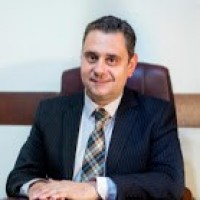 He has also completed postgraduate studies at the University of Nicosia in the field of International Relations and European Studies.He has taught at undergraduate and postgraduate level at the A.E.I. Piraeus T.T. (now University of West Attica), while today he is Coordinator - Professor at the Open University of Cyprus (APKY) and the School of Greek Police Officers (SAEA).He practices law in Greece and Cyprus, dealing with cases of Criminal, Labor, Civil, Commercial and Administrative Law.He has been involved in the pro-community movement of Cypriots in Greece since 2002 and has participated continuously in the conferences of the Federation of Cypriot Organizations of Greece (OKOE), the World Federation of Expatriate Cypriots (POMAK). and the World Coordinating Committee of the Cyprus Struggle (PSEKA), and has held positions of responsibility and today is the General Secretary of the Union of Greek Cypriots (CSR), Deputy Secretary General of the Federation of Cyprus Of Greek Organizations and Vice President of the Attica Region.